There are several ways to keep track of time in C++ programs. We could use the function time from the time.h library. Unfortunately, it can only provide the time to the precision of one second, which is not sufficient for displaying an animation. This function is also rather old and might not function correctly after the year 2038, due to some issues.

The function clock from the same library can usually provide time intervals of higher accuracy. It is sometimes quite simple and convenient to use this function. It would be our second choice.

There are also functions from the C++ chrono library, which is rather new, but those are somewhat more complicated to use.

In our specific case, the simplest method to use is the Allegro's own mechanism for measuring time. It has the benefit of the time measurement pausing while the application is not in focus, which can be quite convenient.

In order to demonstrate how all that is supposed to work, here we present a program that displays a blue ball moving from left to right: 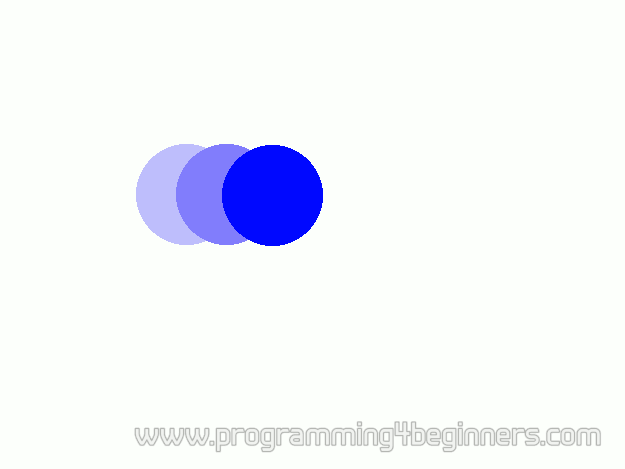 When you run this program, it will display a blue ball moving from left to right. If the focus is switched to another application (by pressing the keys Alt-Tab), the program will pause until it regains the focus.

The program can be ended at any moment due to the condition checked at the beginning of the while loop. The function keypressed will yield truth when a key is pressed. The negation operator is used to reverse that truth value, so that the while loop executes while no key is pressed.

The ball is drawn and the whole image displayed on every iteration of the while loop, until the loop is aborted by pressing a key.

tells the allegro library to enable the tracking of time. The following statement:

tells the Allegro library to call the MillisecondTick function each millisecond. But note that you should not use the install_int function for other purposes except for incrementing the timer variable.


‹ Animation and Keyboard up Using Keyboard to Move Objects ›